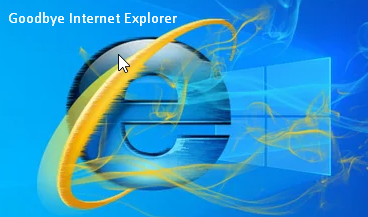 Can you believe Internet Explorer has been around for nearly 30-years? That is coming to an end as Microsoft is retiring the web browser as of June 15. It’s Microsoft’s oldest browser to date, launching it in 1995 as an add-on package for Windows 95. Later providing the app for free as part of the package.

The nearly three-decade-old browser peaked at 95 per cent usage share in 2003. However, IE could not maintain its position, and its user base started to decline drastically as other competitors released new browsers with better user interfaces, faster internet speed and smoother performance.

Since Microsoft Edge is capable of taking on this and other responsibilities, the Internet Explorer 11 desktop application will be discontinued and phased out of support for certain versions of Windows 10 on June 15, 2022.

For more information about this and other happening in the IT industry contact Catalyst IT at 877-843-9611 or submit a request on our Contact Us Page.